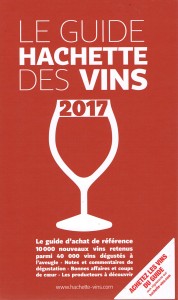 Last week, the Hachette Guide 2017 has been published and this year, our Pouilly-Fumé Villa Paulus 2014 has been awarded as well as our new cuvee Pouilly-Fumé Le Clos du Château Paladi , the Coup de Coeur of the year 2017, with the following wine-tasting notes :

“The Masson-Blondelet Family […] creates a wonderful Pouilly-Fumé made from a plot of old vines located in the heart of the village, on which is built the Château Paladi. In the glass, this wine presents a beautiful floral composition (rose, poeny), embellished by vegetal touches and peach bush notes. Very harmonious, the palate associates intensity and elegance to perfection.”

“This cuvee is called with the Roman name of Pouilly-Sur-Loire and pays tribute to the great-grand-father Paul. A very fruity wine with a touch of candied fruits (pear, orange, passion fruit), round and concentrated on an acidulous basis which brings firmness.”